Talking about safety and security bring us to a list of gadgets, remedies and techniques which can be labelled as “some precautionary measures” in order to stay safe. We all have seen documentaries and movies related to safety issues and things to remember while taking care or installing safety and security systems. Generally what security system should be deployed, strictly depends on the reason of getting a security for example: security of minister would be different from a security at the bank’s gate.

In order to add value to the knowledge, there is are different kinds of security guards as well (provided according to the need of the client), which includes with license and without license Yes! Strange but true most of us don’t know that every security guard is not allowed to shoot someone for the sake of security, there is a special license for that which allows a company to provide guards who can shoot a person (if he/she found as a threat) otherwise without proper permit any guards shoots somebody (will be considered as a criminal offense). 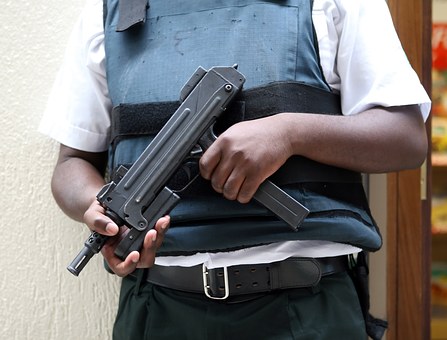 The only type of security which has full rights or in other words (which doesn’t need any permission) they have the license to kill is ‘Z security’. Usually provided to ministers, celebs and other high profile clients. Even in order to avail Z security one has to take special permission as it provide full throttle security, with trained security officers ammunition includes, Heckler & Koch MP5, Sub machine gun which can release around more than 30 round magazine within 3 seconds (hell fire!) and is limited to two shot bursts anybody wants to face such a massive hot iron, has to face the reality check first.

Cars under Z-security are usually NIJ level III or IV. Exclusively made for some high profiles and not easily available in the market, sometimes client’s ask their own used car to be converted into a complete armored one.

House Protection: like we mentioned before clients ask for special stuff they get it, or else usual z security provides everything exclusive and customized for example: personal security elements, codes, special signals to identify threat or danger (known by the clients only). Like they show in a James bond movie, where the mafia don is securing all the treasures using some serious laser beams, vaults, self-destructive laptops (contains information) Blah ! So some elements of it covers under Z security.

Fellows! Some say it’s about destiny, some say it’s about getting unlucky and bear the loss and nobody can avoid it. But honestly, it also depends on how cautious xyz person is? Is he/she taking check on everything around (not everything, than at least 40% of surroundings). No one can live a risk free life but yes! One must at least try to stay safe and secure as much as humanly possible.

We use cookies on our website to give you the most relevant experience by remembering your preferences and repeat visits. By clicking “Accept”, you consent to the use of ALL the cookies.
Cookie settingsACCEPT
Manage consent

Any cookies that may not be particularly necessary for the website to function and is used specifically to collect user personal data via analytics, ads, other embedded contents are termed as non-necessary cookies. It is mandatory to procure user consent prior to running these cookies on your website.